This weekend (September 14-15), Jack Swikart and I headed south to Navy for Laser South for the first regatta of the fall season.

After a restful Friday night at the Harding’s house in Annapolis, we woke up at 7:30am, got cheesy at Naval Bagels, and were on the docks rigging our Lasers by 9am. Quick to launch, the 20 full rig sailors were out on the water thirty minutes later splitting tacks and watching for puffs in the light conditions.

Jack was able to get off the line cleanly for the first set of two races, while I struggled to accelerate despite setting up with wide holes below. Strategically, it was key to simply connect the few puffs and position ourselves for the shift, phasing right and left every two or three minutes. Jack’s 5th and 6th finishes put him towards the top of the results.

As the breeze picked up, the lefties began to roll through. For the next six races, everybody immediately tacked to port after the gun, so competition for the pin end was fierce. For the majority of these races, Jack and I posted midfleet finishes. At the end of the day, the breeze went right, which added to our frustration over the unpredictable conditions. After seven and half hours of sailing, we came in at 5pm.

There was expected to no to little breeze on the second day. The first two races were canceled, unfortunately, considering that Jack and I rounded in the top 5 for each for lack of breeze. However, the race committee opted to move the fleet out of the Severn into the Chesapeake where we sailed 6 more races in breezy and wavy conditions to complete a series of 18 races.

A huge thank you goes out to the Harding family, who not only housed us and made us feel welcome, but also surprised with us lunches and snacks. Also, Jack was very kind to volunteer his car and time for the trip South. And, of course, we are grateful for the help of our coach Jack Kerr, who helped guide us through the tricky conditions. 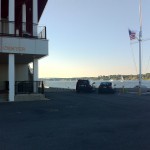 Penn finishes 6th at the…

Penn Sailing at the US…